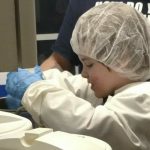 Brian Junior, or Little B, as friends and family know him, was diagnosed with autism at the age of 2. He hadn’t begun to speak yet at that time. Brian was sent to a special preschool with one-on-one support for the next 2 and a half years. At school he learned to communicate some basic ideas, at first through the use of pictures and a little bit of sign language. Brian eventually began to speak, and moved away from using sign and visual aides to communicate. At the age of 8 his communication is still not perfect. He can’t grasp the proper use of many pronouns, and his sentences can have an unusual structure that is difficult for those who don’t know him to interpret. Even as his father, I often struggle to understand Brian’s needs. Occasionally he is as clear as day, and at other times I can’t tell if he wants to change the channel or use the bathroom.

Once Brian reached the age for public school, he began Kindergarten. We had started getting in-home support, and a worker would come to spend several hours per week helping him learn life skills at home and going for community outings. But his behaviors still often got out of control. Brian was loud and distracting, and would often times become aggressive. He couldn’t be in the classroom with the other kids for most of the day, and was given his own classroom. By the beginning of second grade, he was in a downward spiral. What had once been our sweet little boy had turned into the Tasmanian Devil from Loony Toons. He was moved to one of the larger schools in the district, where they believed they could better handle his needs. After a month in the new school, I was called into a meeting where it was recommended that Brian should be placed in an out-of-district special needs school. Unfortunately, things continued to escalate with his behaviors, and Brian ended up with an extended stay in a psychiatric hospital before he was able to begin attending the special school.

Exactly one day after Brian’s intake at the hospital, DHHS decided to review his case and they determined that he would no longer be able to receive MaineCare because he was no longer considered to be disabled. There had been a miscommunication between the Social Security Administration and DHHS, and neither one was taking responsibility for certifying Brian’s status as a disabled person. Regular insurance wouldn’t cover a lot of things that Brian needed, and they also had a 2-weeks-per-year limit on the psychiatric hospital stay. But this hadn’t been my first fight with the system to keep my son’s care going, and I thought I could work with them to solve the issue.

2 months later, my son was still in the hospital and I still hadn’t gotten anywhere. Daily calls to the state consisted of spending an hour on hold before talking to someone for 2 minutes, who would either tell me that I was wrong or they would forward me to the voicemail box of someone who never calls back. The social worker at the hospital had been trying to help too, but without any luck. He couldn’t get through the red tape any better than I could. They had arranged for us to have a case manager to help us get Brian’s in-home services back in order when he left the hospital, however case management companies bill their hours to MaineCare, as do in-home support providers.

Fortunately, the case manager that had been arranged for us had a second job working with the Autism Society of Maine, a non-profit that helps people with autism. Through her work at ASM, Kendra was able to begin our case management at no charge and without the state insurance. She helped us cut through the red tape with DHHS, and she was able to get Brian’s insurance reinstated before we got stuck with a hospital bill that would have taken the rest of our lives to pay off. She is still on Brian’s case, and she has been there with us every step of the way to make sure that Brian’s needs are being met. She was able to use her connections at ASM to help us provide Christmas presents for our kids when money was tight at the holidays, and there have been offers to get financial support so that we could attend special events for the families of people with autism. ASM does an excellent job of connecting those who want to help with those who need the help, and they do it all free of charge. I don’t know what we would have done without the help from the Autism Society of Maine.

Stay up to date with news and updates. Find out what events we’re attending, causes we’re supporting, and a few promotional offers now and then.